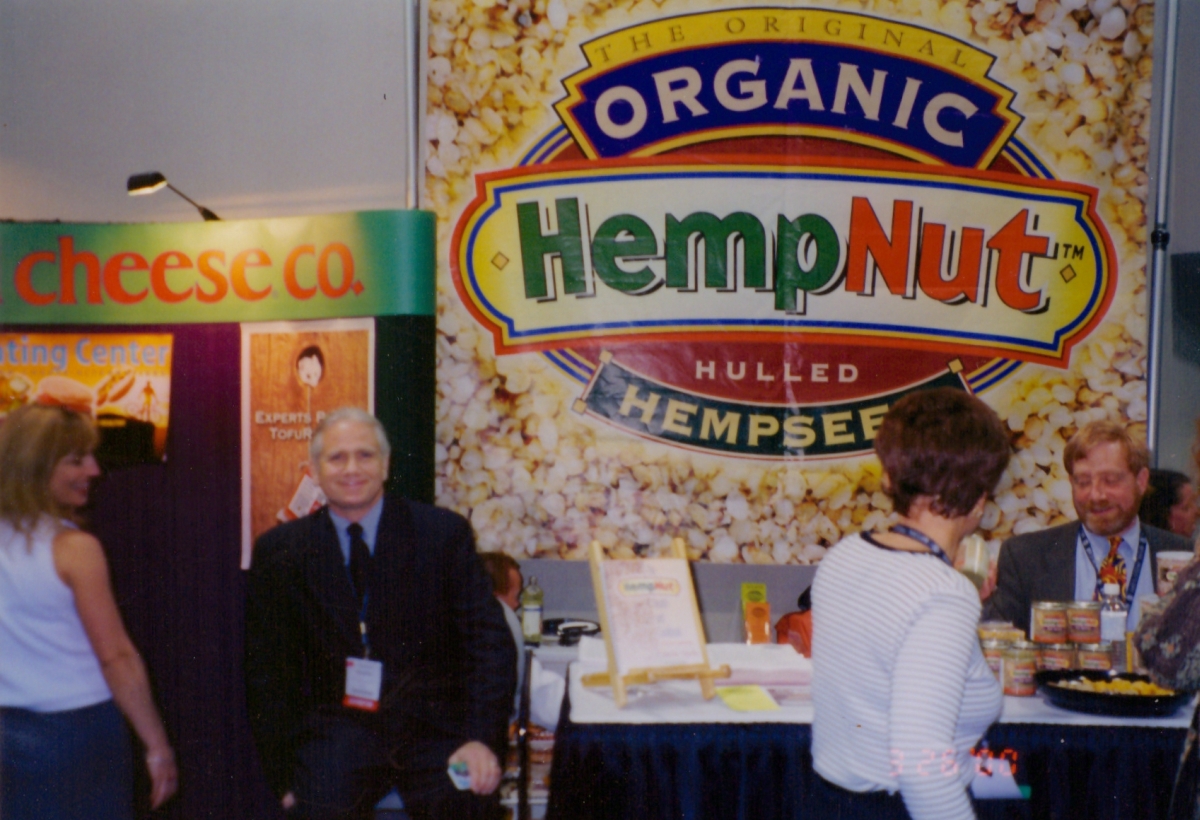 After exhibiting over 150 times, I learned many tricks on how to approach a trade show, how to manage one, and how to follow-up. Best Practices to maximize the $10,000 spent to exhibit at each show, the suite was but one of those tricks.

It served another purpose as well, allowing me to have private meetings with Buyers in the daytime without competitors eavesdropping like they often did. We had a large expensive double-wide corner booth with a 16-foot “HempNut: Soybean of the New Millennium” banner hanging from the rafters over us, in a prime location. One time I noticed the founder of a start-up competitor who was already copying our products and selling them to our customers, with his back to us only a few feet away pretending to read his program. Then I noticed after I talked with the customer, he would chase them down and pitch them; not just once but over and over and over. I finally had to shoo him away. Not coincidentally, the guys knocking us off never came to The Hemp Salon, guiltily knowing what they were up to and revealing it by their absence.

For years this same company would always get a booth closest and line-of-sight of HempNut, Inc. It was so bad the promoter started disguising our name on the booth map, as we always got an early selection because of our long tenure. They would also end up at these esoteric trade shows we attended, obviously following our every move. At one they even told the V.P. of R&D at Kraft Foods that they manufactured for us, a flat-out lie.

I eventually hired someone to talk to them as a potential investor to see what they had to say. They told her “Richard has no heart, but we do.” Sure, the guy who could shut you down at the border for copying his trade name and trade dress for years but doesn’t, who could sue you in California and make you come all the way from Canada to defend it but doesn’t despite having the deeper pockets, whose booth you hang around all day to snag his customers, who years earlier using his long experience in the food industry provided proof of concept of the business model that you copied, that guy has no heart but you, the copy-cats who lie to the Kraft VP, do.

Another company I inspired to move up the food chain from selling compost bins used the hemp trade association of which he was Secretary to finance his trade show booth, then kept the leads he generated for himself. He’s the one who moved hundreds of miles to my small town in order to pick my brain and copy my business model, even hiring my ex-CEO. Ironically both socially-irresponsible companies later got social responsibility awards and became B Corps.

Despite competing against mafia-owned companies for years in the notoriously corrupt perishable food industry, I found that only the Hempsters, the “Hemp Bros,” pushed the boundaries of ethics like none before. Why didn’t I stop these guys? Because as the progenitor of this new industry segment that everyone wanted in on, shelled hempseed as food, I was torn between using hard-ball business tactics and encouraging the industry I cultivated to flourish.

The Inc. 500-winning MBA in me knew I could do certain things to shut them down, but the industry leader in me wanted to nurture the infant hemp foods industry, not own it all. While they wanted as much of a monopoly as possible, I did not. It was not all about the Benjamins for me, but rather using the business of hemp food to push the legalization discussion forward. When your mantra is “Business = Activism” it’s not cool to stop those same businesses as that also slows the activism hemp businesses naturally represent. As a result, it would later become hemp’s first billion dollar segment.

I carried along new hemp companies while still promoting ourselves, because when you’re a long-established company, 90% of an emerging industry with deep pockets driven by altruism, you can afford to. Even helped trade associations get better booth placement and improve promotion, and organized and spoke at hemp educational seminars there. We often bought promotional items made of hemp to give away, like hemp ball caps with our logo, tie-dye T-shirts, and hempen refrigerator gloves used to stock cold items (see right). That allowed our logo to be seen hundreds of times a day by the store worker and consumers, subtle brand reinforcement. I gave away hundreds of little booklets on hemp I bought from the compost bin peddler who later copied my business, and 100 hemp plastic frisbees made by another “Hemp Bro” copying us.

On the show floor, I gave even direct competitors space in our large booth, Heavenly Hemp by Lenda Hand was one (at right in the image at left), the trade group Hemp Industries Association and its members was another.

“A rising tide lifts all ships” was my philosophy and I was trying to increase legitimacy for the emerging hemp food segment in the eyes of the trade buyers, many of whom were dead-set against hemp (such as Whole Foods Market).

Although in hindsight, that altruism was arguably the dumbest thing I did, a tuna swimming in a sea of sharks. I was naïve, and assumed wanted people to Be Best, but it turns out they just wanted to Be Rich (and I was in their way).

Once they copied my business model they didn’t need me any longer. In business, the Pioneer is the one with arrows in his back, not front.