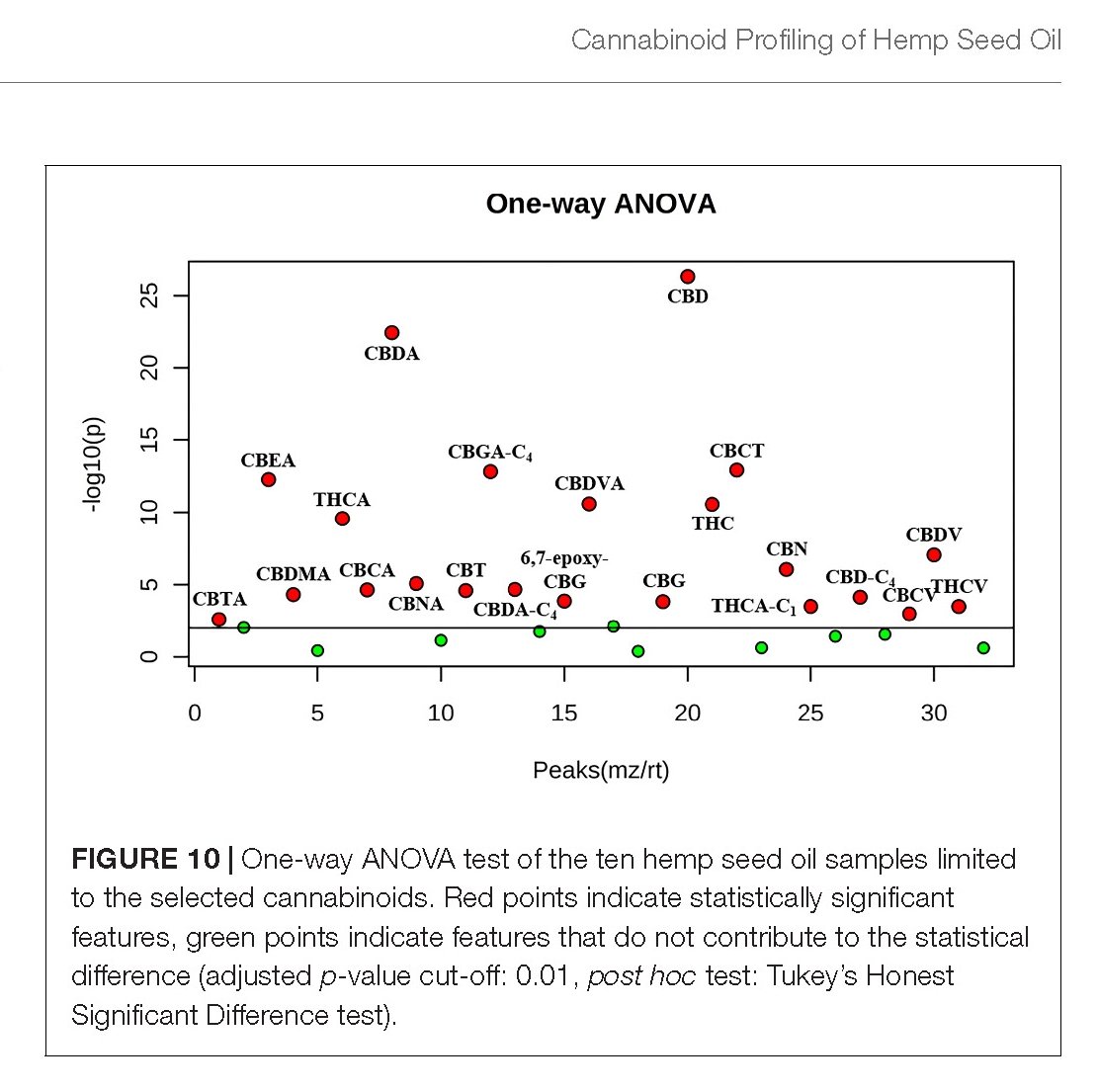 “DISCUSSION
Hemp seed oil has been an inestimable source of nutrients for thousands of years (Callaway, 2004). Nowadays, despite the scientific evidence that claims beneficial biological properties for this cannabis derived food product, people are still skeptical about its nutritional and therapeutic value, generally due to the potential risk ascribed to intoxicating cannabinoids (Crescente et al., 2018). However, taking into account that there are strict laws on THC levels in cannabis derived products, it is of great importance to shed lights on the beneficial effects deriving from the contribution of other cannabinoids. Indeed, it is now a common belief that either THC or CBD alone are less effective than a combination of cannabinoids or of cannabinoids and other compounds in producing the final biological activity of hemp seed oil and other cannabis derived products (Crescente et al., 2018).

For the first time several cannabinoids have been detected in hemp seed oil, most of which resulted relevant in determining a statistical difference in the chemical composition. Although CBDA and CBD rank first in determining the largest effect on the chemical differences among the ten oils due to their higher abundance, 20 other “minor” cannabinoids are also responsible for the chemical differentiation. This adds a new question mark on the extreme variability in the chemical composition of hemp seed oil mostly deriving from the hemp variety, which is unavoidably translated to the pharmacological versatility of this product. In this context, it is important to underline that very little is known about the pharmacological activities of many cannabinoids, including cannabielsoin (CBE), CBD, THC and CBG derivatives, or CBD, THC and CBG homologs with different length of the side alkyl chain.

In this view, it is extremely important to bear in mind the big difference between the acidic and neutral form of a cannabinoid. For example, while THC is known for its psychotropic activity, the very few studies available in the literature suggest that THCA is void of such effects given its presumed inability to pass the blood-brain barrier (Jung et al., 2009; Guillermo, 2016), but it has shown some anti-proliferative/pro-apoptotic activity (Ligresti et al., 2006). Several studies have explored the conversion kinetics of THCA into THC, indicating that heat is required for this reaction to occur and that uncomplete conversion is unavoidably obtained at temperatures below 160C (Perrotin-Brunel et al., 2011; Wang et al., 2016). Therefore, if hemp seed oil is consumed without heating, the levels of THC will remain low and its acidic form will be taken.

Although cannabinoids represent a small percentage among all hemp seed oil components (proteins, carbohydrates, fatty acids, etc.), the results obtained by MSA suggest they actively contribute to the chemical variability of the final product. Taking into account that each cannabinoid is responsible for a specific biological activity, it is reasonable to hypothesize that they participate to the overall effect generated by hemp seed oil consumption.

Although a semi-quantification should be regarded with different levels of confidence given the lack of analytical standards for most of the known cannabinoids, it still represents a useful tool for determining which cannabinoid is more likely to produce a biological effect. Nonetheless, the results of the semi-quantification indicated that all cannabinoids levels were below 5 ppm, considered the THC limit recommended by the German legislation, which is the most restrictive. Such low concentrations could have relevant nutraceutical effects, but it is difficult to determine the actual pharmacological evidence given the limited scientific studies regarding the minimum effective dose of cannabinoids. Apart from THC, there are no guidelines concerning the maximum daily dose of the known cannabinoids that can be consumed by a single person.

Moreover, previous works have reported that even consuming low-THC hemp seed oil, bioaccumulation and subsequent metabolite excretion may result in positive cannabinoid test in urines (Callaway et al., 1997; Lehmann et al., 1997; Struempler et al., 1997; Bosy and Cole, 2000). This consideration is applicable to all “classical” and “minor,” intoxicating and non-intoxicating cannabinoids, including those with unknown biological activity. This scenario is further complicated since all cannabinoids generally interact with each other and/or with other noncannabinoid compounds determining an unpredictable final effect (Morales et al., 2017; Turner et al., 2017). Hence, the relative proportions between cannabinoids are also important for the final resulting effect. At this regard, our results clearly indicate extreme variability in the cannabinoid composition between all samples. It is then expected that this variability is translated into a completely variable nutraceutical profile.

For this reason, even though it is not possible to explain the extreme pharmacological versatility arisen from the combination of all cannabinoids, the analysis and identification of as many of them as possible in each hemp seed oil sample is crucial for exploiting the full potential for human life and well-being of this unique food product.”