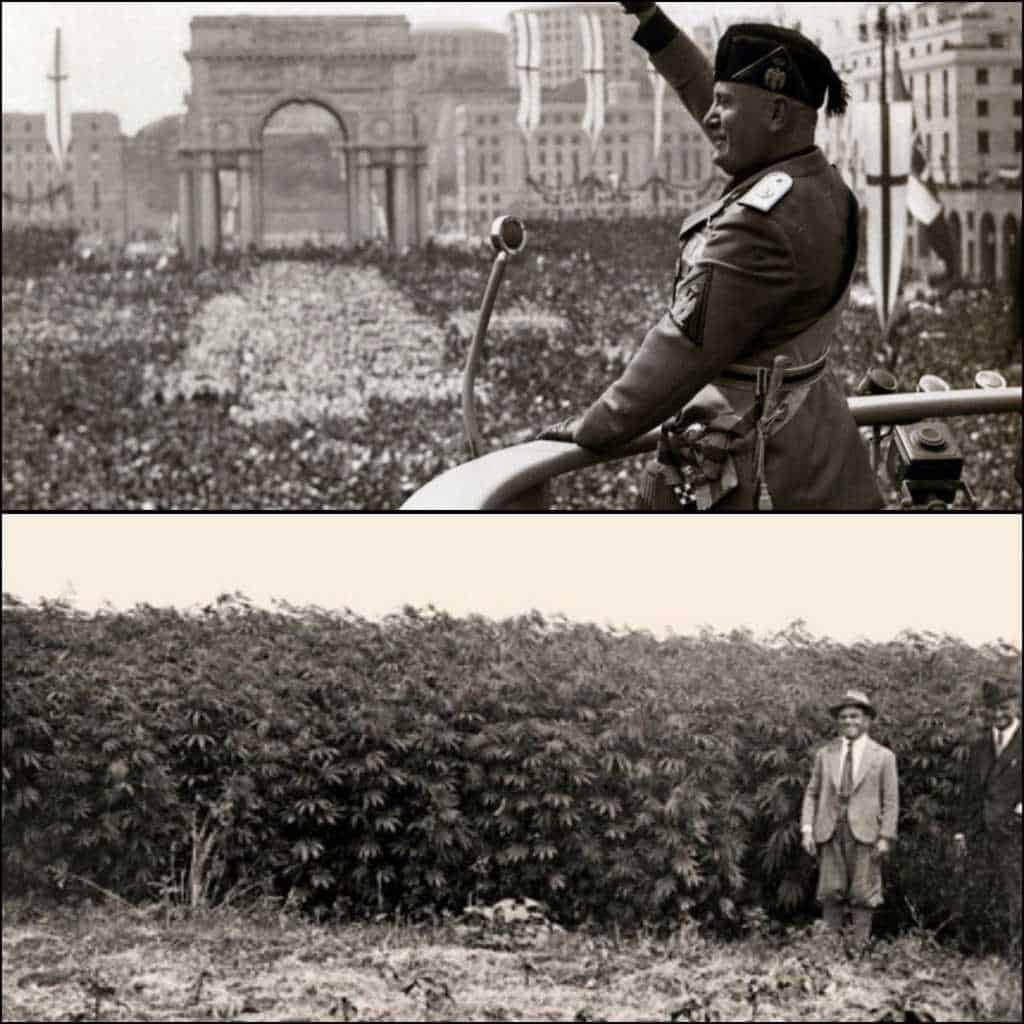 Regarding Hemp in Italy, from Canapando:

A small excerpt from the history of Hemp at the time of Fascism.

Many know the numerous uses that can be made of hemp and that its cultivation and exploitation by man dates back more than 2500 years ago.

However, not everyone knows that Italy has a prestigious tradition in this field both for the quality and quantity of cannabis produced.

Among other things, paradoxically, the heyday for the Italian hemp sector was between the early 1920s and the mid 1940s, in the midst of the Fascist period.

Between the end of the 19th century and the beginning of the 20th century, the Italian hemp yarn was renowned all over the world for its softness, luster and whiteness.

These crops were mainly distributed in Northern Italy and it is estimated that in 1923 the sector employed about 20,000 people as reported in the Catalog of the Linificio e Canapificio Nazionale. This catalog was an expression of the national industrial association. In short, it was not the stuff of long-haired junkies as a certain part of public opinion wants to pass those who do business with this plant, but prestigious businessmen.

Important processing plants for this plant were located in Cassano d’Adda, where already in 1895 there was a rope factory that exported all over the world and in Genoa which boasted a company of yarns for the naval industry first in the whole Mediterranean for production.

Italy was so advanced in Europe that in 1913 the Reich Office for the Interior drafted a report on the cultivation and processing of hemp in Italy.

This is an excerpt: “ The overall extension of hemp cultivation in Italy is currently to be estimated at around 90,000-100,000 hectares. In the first place is definitely Emilia, in particular the province of Ferrara, where about 12% of the entire surface is worked with hemp ”.

In 1918 the union of Spinners and Hemp Weavers was born.

Of course, this sector too was coordinated and supervised by the Fascist Farmers Confederation, which controlled all the consortia.

In practice, it regulated production, proportioning it to the demand for consumption, using the most suitable land and areas, but also valued the products, seeds and derivatives, and promoted the maceration processes of the fiber and the technical evolution.

The importance of the hemp sector was such that the Duce himself put it this way in 1925 : “Hemp was placed by the Duce, on the agenda of the nation, because autarchic par excellence is destined to emancipate us as much as possible from the heavy tax we have again abroad in the textile fiber sector. It is not only the agricultural economic side, there is also the social side whose impact could not be better highlighted than by the following figure: 30,000 workers to whom the Italian hemp industry employs”.

The beginning of the decline in the reputation of cannabis came a few years later when the historical process that led us to the falsifications and mystifications of today begins.

Hashish, its recreational derivative, is declared an enemy of race and drugs by “ner**i”.

Despite this, the industrial use of the plant continued to grow until the end of the Second World War.

In 1941, ENEC , the National Hemp Exporting Body, was born , which has a monopoly on the sale abroad of both raw and combed hemp and hemp tow and controls the export of manufactured goods. Also in the same year, the area cultivated with hemp went from 60 thousand hectares in 1934 to 102 thousand .

This is the peak of production in Italy, from here on an unstoppable meltdown will begin.

A decline desired by politics and international lobbies, which have pushed the use of fibers derived from petroleum such as rayon, nylon or cotton.

On the other hand, Italy had entered the western bloc and the Marshall Plan did not allow for replicas in terms of industrial and economic strategic choices.

Thus the American boycott together with its prohibition makes it an ideological question and defines the contours of an evil work: the slow decline of one of the most useful plants for man and its demonization.

The result was the national extinction of all types of crops in 1971.”