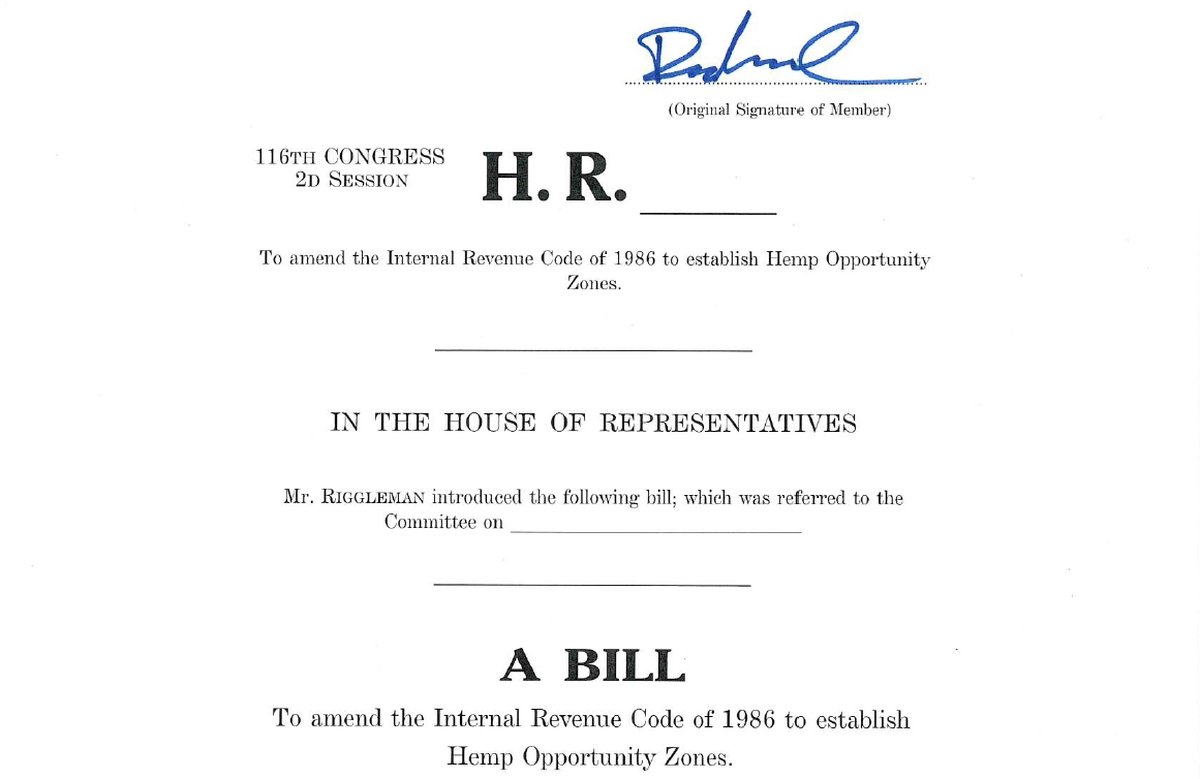 The bill expands on the Opportunity Zones program which was a key component of the 2017 Tax Cuts and Job Act. More importantly it requires a study of many aspects of commercial hemp, from adding hempseed to school lunches, use as an animal feed, source material for PPE, feasibility of USDA compliance by farmers, raising max THC to 1%, intoxication potential from hemp, ability to compete in a 1% world, and use of hemp as an energy source.

“The Hemp Opportunity Zone Act is a huge win for farmers in the 5th District. Hemp farming is a new and thriving industry,” said Congressman Riggleman. “By providing these tax incentives hemp growers in Virginia and the 5th District are primed to lead based on their historic production of tobacco,” said Riggleman.

The governor of each state will designate opportunity zones, while not exceeding 5% of the total area of the state. The legislation will create a program that provides tax incentives to farmers who grow and produce hemp in low income areas. The goal of the program is to help farms in the area that need it most. It was assigned to the House Agriculture, and Ways and Means Committees.

(a) IN GENERAL.-The Secretary of the Treasury, in consultation with the Secretary of Agriculture, shall study the issues described in subsection (b) with respect to the production of hemp and, not later than 1 year after the date of the enactment of this Act, submit to Congress a report of the findings of such study.
(b) ISSUES.-The issues described in this subsection, with respect to the production of hemp, are as follows:
(1) The potential opportunities for hemp seed to be used as an animal feed and any obstacles to approval for such use.
(2) The potential opportunities for hemp to be used to create personal protective equipment for healthcare workers and first responders.
(3) The feasibility and financial impact of hemp producer compliance with applicable Department of Agriculture sampling timetables.
(4) The feasibility of hemp producer compliance with Department of Agriculture reporting requirements.
(5) The feasibility of hemp producer compliance with a legal maximum 0.3 percent tetrahydrocannabinol limitation, including compliance and losses due to non-compliance, and a comparison to the feasibility of a legal maximum 1.0 percent tetrahydrocannabinol limitation.
(6) The maximum tetrahydrocannabinol level for the crop to have no psychotropic effect or intoxicating potential.
(7) The ability for United States hemp producers to compete globally with other countries that have a maximum 1.0 percent tetrahydrocannabinol limitation.
(8) Identifying market challenges and opportunities for a craft and small hemp producers to remain competitive in the United State and global hemp marketplace.
(9) The nutritional value and benefits of foods, drinks, and supplements produced from hemp-based products, and the potential benefits of including hemp-based food, drink, supplements, and protein to certain public school meal programs.
(10) Which items procured by the Federal Government, or items used by contractors or subcontractors of the Federal Government at any tier, can be substituted by a hemp-based product.
(11) Identify potential opportunities for hemp to be used as a renewable energy source.”