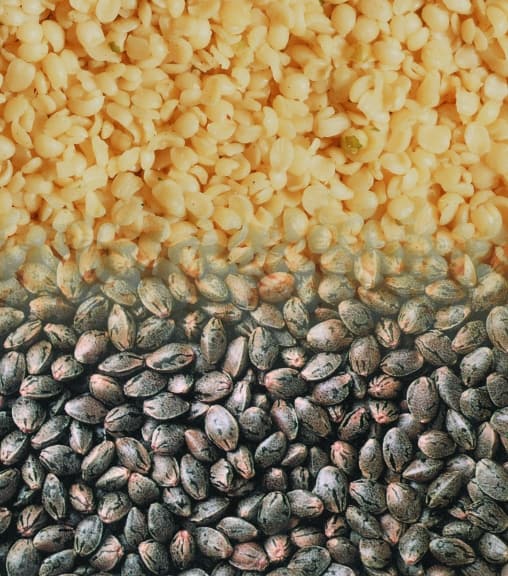 I may have accidentally started the canard 27 years ago that unlike soya, hempseed has no antinutritional factors. But I was wrong: it appears that hempseed in fact contains some, namely phytic acid, condensed tannins, cyanogenic glycosides, saponin and trypsin inhibitor (the main one in soya, along with oligosaccharides).

Hemp seeds showed a substantial content of tocopherols and total phenols (Table 2). In particular, TP content was higher in hemp seed than in flax, which is a species extremely rich in total phenols (Russo and Reggiani, 2015c). The high antioxidant activity detected in almost all hemp seeds, due to tocopherols and TP content, can ensure high oxidative stability that would makes hemp oil suitable for food and industrial applications, as well as improving the nutritional quality of human diets.

However, despite the functional and nutraceutical properties of this crop, the seeds are not totally free of antinutritional compounds, such as phytic acid, condensed tannins, cyanogenic glycosides, saponin and TI (Russo and Reggiani, 2013; Pojic et al., 2014). The quite high content (mean 5.84%) of phytate in our hemp collection confirmed the findings of Russo and Reggiani (2013) and the variability between the different hemp genotypes was statistically significant (Table 2). In some genotypes, the phytate content was more than 7% (those with letter “a” by Duncan’s range test). Therefore, the use of such meal appears rather limited for monogastric animals and in human nutrition since a high level of phytic acid will affect protein digestibility, organoleptic properties, and bioavailability of macro- and micro-elements (Guillamón et al., 2008). Furthermore the high phytate content found, particularly in French hemp seed cultivars, will greatly limit the use of this protein source in novel food or feed formulations.

In addition, Trypsin Inhibitor (TI) is responsible for the reduced digestibility of seed proteins and, for this reason, it constitutes one of the main antinutritional factor in plant seeds (Peric et al., 2013). As shown in Table 2, considerable variability in TI activity among all hemp meals was evident. However, the levels of TI in hemp seeds were lower in comparison with those observed in some cereals and soybean (Sosulki et al., 1988; Tsukamoto et al., 1995). Pearson coefficient (r = 0.679) indicated a strong positive correlation between TI activity and phytate content (Table 3) and this is in agreement with previous results reported by Russo and Reggiani (2015b) who analyzed six hemp cultivars grown in two different experimental fields for two consecutive years. In conclusion our analysis confirmed that hemp seed is an excellent product in terms of protein content, oil composition and antioxidant molecules for food and feed formulations, but the content of some antinutritional compounds, particularly phytate will influence negatively its potential nutritional value. Therefore, an improvement for this trait would be necessary.

Based on our data, some hemp accessions present in our germplasm collection, appear to contain more interesting traits than the cultivated hemp cvs. In fact, hemp accessions appeared more interesting then hemp cvs with regard to protein and oil content. In particular the Italian CAN40 showed a high content of both, therefore, might be used to improve oil and protein content in hemp cvs through hybridization and selection. Furthermore, the Italian accession CAM40 might be also a good candidate to reduce the content of phytate. In general, we observed that, among the genotypes analyzed, all Italian dioic and monoic cvs showed less phytate content than the monoic French cvs. This trend, except for CAN48, is also observed in the other Italian accessions. Therefore, our analysis evidenced that, although we analyzed a small segment of hemp germplasm collection and for only 1 year, probably an improvement of the cultivated hemp cvs for some traits might be possible using the large genetic variability present in the germplasm of hemp.