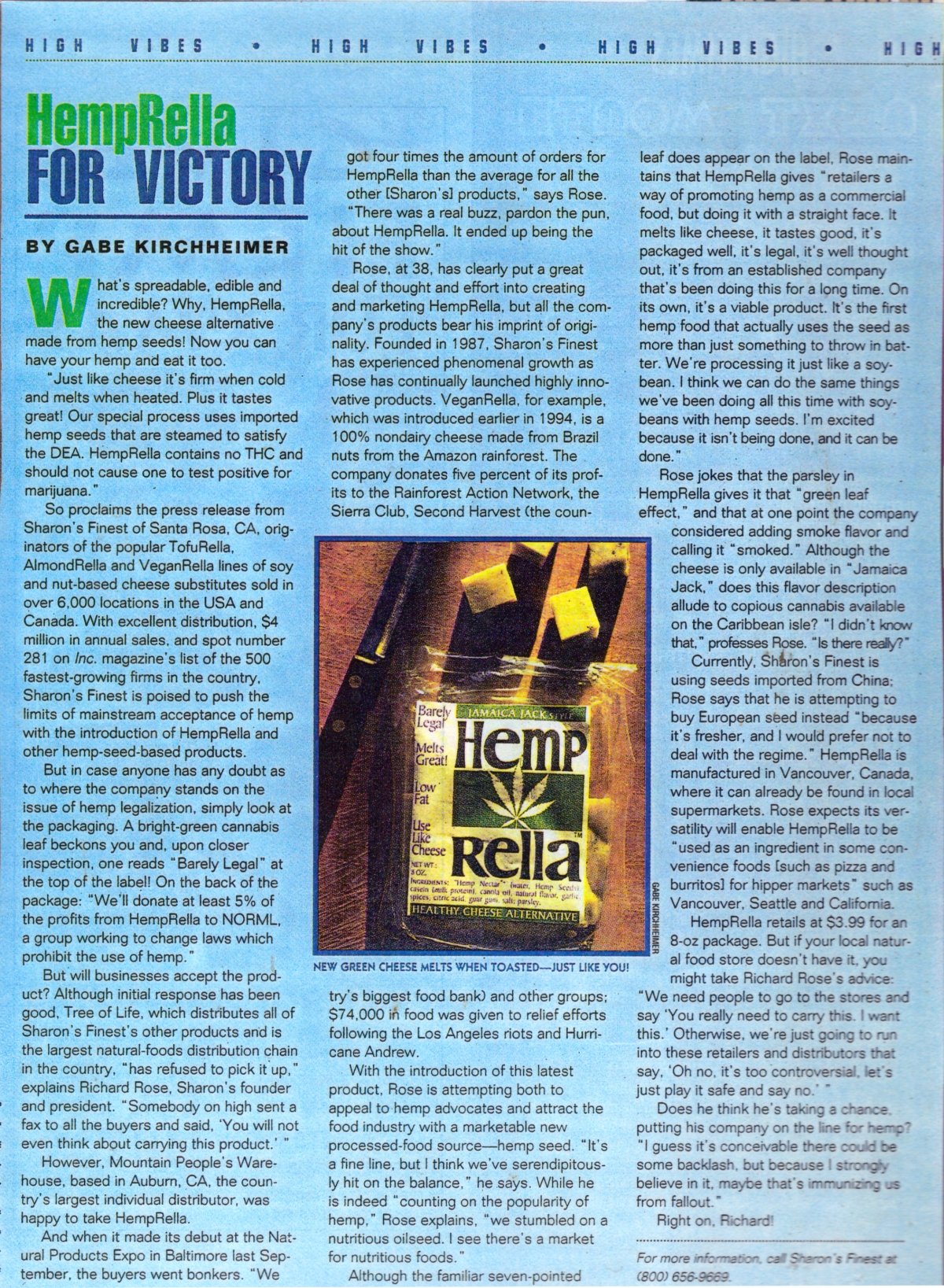 What’s spreadable, edible and incredible? Why, HempRella, the new cheese alternative made from hemp seeds! Now you can have your hemp and eat it too.

“Just like cheese it’s firm when cold and melts when heated. Plus it tastes great! Our special process uses imported hemp seeds that are steamed to satisfy the DEA. HempRella contains no THC and should not cause one to test positive for marijuana.”

So proclaims the press release from Sharon’s Finest of Santa Rosa, CA, originators of the popular TofuRella, AlmondRella and VeganRella lines of soy and nut-based cheese substitutes sold in over 6,000 locations in the USA and Canada. With excellent distribution, $4 million in annual sales, and spot number 281 on Inc. magazine’s list of the 500 fastest-growing firms in the country. Sharon’s Finest is poised to push the limits of mainstream acceptance of hemp with the introduction of HempRella and other hemp-seed-based products.

But in case anyone has any doubt as to where the company stands on the issue of hemp legalization, simply look at the packaging. A bright-green cannabis leaf beckons you and, upon closer inspection, one reads “Barely Legal” at the top of the label! On the back of the package: “We’ll donate at least 5% of the profits from HempRella to NORML, a group working to change laws which prohibit the use of hemp.”

But will businesses accept the product? Although initial response has been good, Tree of Life, which distributes all of Sharon’s Finest’s other products and is the largest natural-foods distribution chain in the country, “has refused to pick it up,” explains Richard Rose, Sharon’s founder and president. “Somebody on high sent a fax to all the buyers and said ‘You will not even think about carrying this product.’”

However, Mountain People’s Warehouse, based in Auburn, CA, the country’s largest individual distributor, was happy to take HempRella.

And when it made its debut at the Natural Products Expo in Baltimore last September, the buyers went bonkers. “We got four times the amount of orders for HempRella than the average for all the other [Sharon’s] products, “ says Rose. “There was a real buzz, pardon the pun, about HempRella. It ended up being the hit of the show.”

Rose, at 38, has clearly put a great deal of thought and effort into creating and marketing HempRella, but all the company’s products bear his imprint of originality. Founded in 1987, Sharon’s Finest has experienced phenomenal growth as Rose has continually launched highly innovative products. VeganRella, for example, which was introduced earlier in 1994, is a 100% nondairy cheese made from Brazil nuts from the Amazon rainforest. The company donates five percent of its profits to the Rainforest Action Network, the Sierra Club, Second Harvest (the country’s biggest food bank) and other groups; $74,000 in food was given to relief efforts following the Los Angeles riots and Hurricane Andrew.

With the introduction of this latest product, Rose is attempting both to appeal to hemp advocates and attract the food industry with a marketable new processed-food source– hemp seed. “It’s a fine line, but l think we’ve serendipitously hit on the balance,” he says. While he is indeed “counting on the popularity of hemp,” Rose explains, “we stumbled on a nutritious oilseed. I see there’s a market for nutritious foods.”

Although the familiar seven-pointed leaf does appear on the label, Rose maintains that HempRella gives “retailers a way of promoting hemp as a commercial food, but doing it with a straight face. It melts like cheese, it tastes good, it’s packaged well, it’s legal, it’s well thought out, it’s from an established company that’s been doing this for a long time. On its own, it’s a viable product. It’s the first hemp food that actually uses the seed as more than just something to throw in batter. We’re processing it just like a soybean. I think we can do the same things we’ve been doing all this time with soybeans with hemp seeds. I’m excited because it isn’t being done, and it can be done.”

Rose jokes that the parsley in HempRella gives it that “green leaf effect,” and that at one point the company considered adding smoke flavor and calling it “smoked.” [later, we did RR] Although the cheese is only available in “Jamaica Jack,” does this flavor description allude to copious cannabis available on the Caribbean isle? “l didn’t know that,” professes Rose. “Is there really?”

Currently, Sharon’s Finest is using seeds imported from China; Rose says that he is attempting to buy European seed instead “because it’s fresher, and l would prefer not to deal with the regime.” HempRella is manufactured in Vancouver, Canada, where it can already be found in local supermarkets. Rose expects its versatility will enable HempRella to be “used as an ingredient in some convenience foods (such as pizza and burritos) for hipper markets” such as Vancouver, Seattle and California.

HempRella retails at $3.99 for an 8-oz package. But if your natural food store doesn’t have it, you might take Richard Rose’s advice: “We need people to go to the stores and say ‘You really need to carry this. I want this.’ Otherwise, we’re just going to run into these retailers and distributors that say, ‘Oh no, it’s too controversial, let’s just play it safe and say no.’”

Does he think he’s taking a chance putting his company on the line for hemp? “l guess it’s conceivable there could be some backlash, but because l strongly believe in it, maybe that’s immunizing us from fallout.”

Caption: New Green Cheese Melts When Toasted– Just Like You!