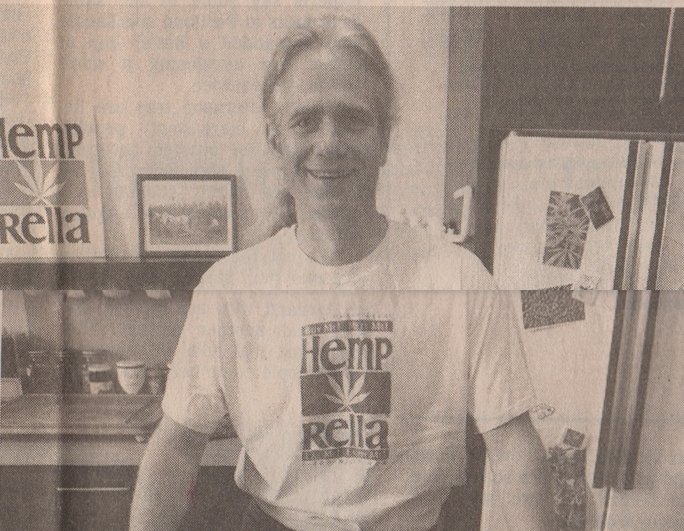 Used for centuries to make ropes and paper, hemp is starting to shake its seedy reputation in the United States. Demand for products made with industrial-grade hemp is getting, well, higher and higher.

A dozen or so companies have sprung up in Sonoma County over the last five years to manufacture everything from clothing to cosmetics to cheese made from industrial-grade hemp. Most are small and operate out of a house, but several export their products and generate hundreds of thousands of dollars in sales annually.

Nationwide, the number of manufacturers, importers and retailers focusing on hemp products has grown from 15 in 1992 to more than 300 today, said Mari Kane, publisher of HempWorld magazine in Sebastopol.

“There are a lot of Fortune 500 companies that are jumping on the hemp bandwagon,” Kane said.

Last month, Adidas released a tennis shoe made out of hemp. Designer Calvin Klein uses hemp fabric to make bed linens, while Ralph Lauren uses the fiber to make clothes, Kane said. International Paper, which owns Masonite, is trying to make fiberboard with hemp in its research labs, she said.

On the retail side, 10 new hemp shops are opening every month in the United States, Kane said. Her bimonthly magazine, which has covered the industrial-grade hemp business for the last two years and has a circulation of 6,000, will release an international directory of hemp business in February.

What’s the buzz all about?

Advocates say there are thousands of potential uses for hemp, which was reportedly grown by George Washington and Thomas Jefferson for its fiber and was a legal cash crop in the United States until cultivation was essentially banned in 1937.

A story in Popular Mechanics magazine the following year concluded “Over 25,000 products can be manufactured from hemp, from cellophane to dynamite.

Just don’t try to smoke it.

Yes, hemp is another name for Cannabis sativa, an illegal drug better known as marijuana. But industrial grade strains of hemp contain only trace amounts of THC, or tetrahydrocannabinol, the psychoactive chemical in marijuana.

“Hemp won’t get you high, and marijuana is not good for clothing,” said Richard Rose, president of Sharon’s Finest, a Santa Rosa health food company that makes cheese and veggie burgers from hemp seeds.

Sharon’s Finest, which made Inc. magazine’s list of the 500 fastest-growing companies in 1993, created the single biggest selling hemp product in the United States: HempRella, a cheese-like tofu product introduced in 1994. Last June, the company rolled out its Hempeh Burger, a veggie burger made with whole hemp seeds.

Sharon’s Finest, which rang up around $3 million in sales last year according to Rose, imports hemp seeds from China to a production plant in Canada. Under strict import laws, the seeds must be steamed upon arrival until they are sterilized, preventing them from sprouting and growing. The company then processes the hemp seeds into food products, similar to the way it processes soybeans. The products are sold in health food stores across the U.S. and Canada.

Rose expects sales of his hemp products will grow at triple-digit rates for the next three years and put his 9-year-old company back on the Inc. list. Over the next two months, Rose plans to open a production facility in England in a joint venture targeting European markets. This spring, the company plans to release two new products made from hemp seeds: HempScream, a soft-serve frozen desert, and a powdered “milk.”

The mother of the hemp industry in Sonoma County is Carol Miller, who started making cosmetics with hemp seed oil in 1990. She said her Cazadero business, Hemp Essentials, increased sales 50 percent last year to $60,000.

“It is sort of like a vegetarian cod liver oil,” said Miller, who sells her products in the United States and exports to Canada and New Zealand. In Sonoma County, her products are available at the Community Market in Santa Rosa and the Cazadero General Store.

Clothing designers have been the biggest users of industrial-grade hemp in the United States since the industry began to re-emerge in this country in the late 1980s, said Kane at HempWorld.

The collapse of the Soviet Union, which had been purchasing large amounts of hemp fabric to clothe its army, left Eastern European hemp producers without a market almost overnight, Kane said.

“At that point, they started looking to the west for their hemp market — and they found it,” Kane said.

Mindful Products, an apparel company in Sonoma owned by Max Salkin and Yoon Kwon, imports hemp fabric from China to make their “YOON-A-VERSE” line of clothes and footwear. The company designs its clothes and contracts production out to garment makers in San Francisco. The clothes, which retail from $58 to $110, are sold at 250 stores internationally including Pastorale in Santa Rosa and Mama Luna in Sebastopol.

Hemp is more than 30 percent stronger than cotton and is grown without pesticides, Salkin said. Some of Mindful Product’s clothes are made from 100 percent hemp fabric, while others are made from a blend of hemp and silk.

Inevitably, Salkin gets asked that one dopey question about his clothes.

Another clothing designer, Candi Penn of Cannabis Clothes in Occidental, makes skirts of hemp and silk that sell for $70 and up, and flannel-lined hemp jackets that sell for $250. Penn and other local manufacturers formed the Redwood Hemp Collective, a group of about 10 manufacturers that buy raw materials and market their products together.

“We want to open a hemp store in Sonoma County. Hopefully this year, you will see that,” Penn said. Lyn de Moss, owner of Hemp Hemp Hooray! in Occidental, makes facial bath mitts out of hemp fabric, which retail for $7 to $10, and hemp-covered cat toys filled with organic catnip that sell for $2.50. She also makes small amounts of custom clothing.

Hemp manufacturers are divided over the issue of how to market their products. Many incorporate the marijuana leaf in their logos, aiming their products at people who have enjoyed smoking pot. Others try to distance themselves from the drug, emphasizing the environmental benefits of the plant.

“I don’t promote the fact that it is marijuana, because it really isn’t. There is no THC in any of the fabrics that utilize,” de Moss said.

Sharon’s Finest uses the unmistakable leaf in its logo, but Rose said “It is not a marijuana leaf. It is a drug-free hemp leaf.” Still, Rose said the association with marijuana may be the reason that a major food distributor, Tree of Life, and a chain of health food stores, Fresh Fields, refuse to sell HempRella.

Industrial-grade hemp has become “one of the many casualties of the war on drugs, and very unjustly so,” Rose said.