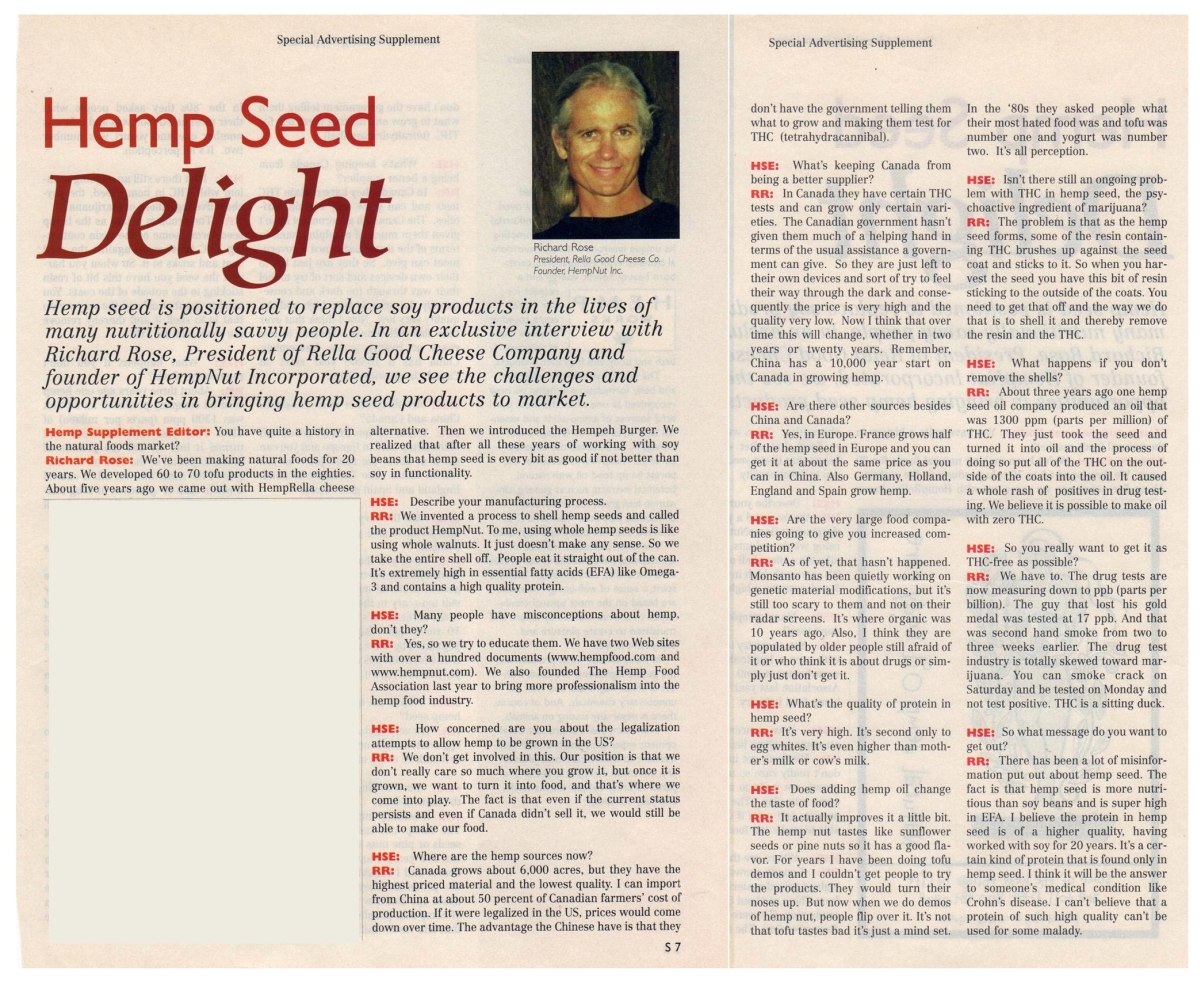 Hempseed is positioned to replace soy products in the lives of many nutritionally savvy people. In an exclusive interview with Richard Rose, President of Rella Good Cheese Company and HempNut Incorporated, we see the challenges and opportunities in bringing hemp seed products to market.

Hemp Supplement Editor: You have quite a history in the natural foods market?

Richard Rose: We’ve been making natural foods for 20 years. We developed 60 to 70 tofu products in the eighties. About five years ago we came out with HempRella cheese alternative. Then we introduced the Hempeh Burger. We realized that after all these years of working with soy beans that hemp seed is every bit as good if not better than soy in functionality.

RR: We invented a process to shell hemp seeds and called the product HempNut. To me, using whole hemp seeds is like using whole walnuts. It just doesn’t make any sense. So we take the entire shell off. People eat it straight out of the can. It’s extremely high in essential fatty acids (EFA) like Omega-3 and contains a high quality protein.

HSE: Many people have misconceptions about hemp, don’t they?

RR: Yes, so we try to educate them. We have two web sites with over a hundred documents. We also founded The Hemp Food Association last year to bring more professionalism into the hemp food industry.

HSE: How concerned are you about the legalization attempts to allow hemp to be grown in the US?

RR: We don’t get involved in this. Our position is that we don’t really care so much where you grow it, but once it is grown, we want to turn it into food, and that’s where we come into play. The fact is that even if the current status persists and even if Canada didn’t sell it, we would still be able to make our food.

HSE: Where are the hemp sources now?

RR: Canada grows about 6,000 acres, but they have the highest priced material and the lowest quality. I can import from China at about 50 percent of Canadian farmers’ cost of production. If it were legalized in the US, prices would come down over time. The advantage the Chinese have is that they don’t have the government telling them what to grow and making them test for THC (tetrahydrocannabinol).

HSE: What’s keeping Canada from being a better supplier?

RR: In Canada they have certain THC tests and can grow only certain varieties. The Canadian government hasn’t given them much of a helping hand in terms of the usual assistance a government can give. So they are just left to their own devices and sort of try to feel their way through the dark and consequently the price is very high and the quality very low. Now l think that over time this will change, whether in two years or twenty years. Remember, China has a 10,000 year start on Canada in growing hemp.

HSE: Are there other sources besides China and Canada?

RR: Yes, in Europe. France grows half of the hemp seed in Europe and you can get it at about the same price as you can in China. Also Germany, Holland, England and Spain grow hemp.

HSE: Are the very large food companies going to give you increased competition?

RR: As of yet, that hasn’t happened. Monsanto has been quietly working on genetic material modifications, but it’s still too scary to them and not on their radar screens. It’s where organic was 10 years ago. Also, I think they are populated by older people still afraid of it or who think it is about drugs or simply just don’t get it.

HSE: What’s the quality of protein in hemp seed?

HSE: Does adding hemp oil change the taste of food?

RR: It actually improves it a little bit. The hemp nut tastes like sunflower seeds or pine nuts so it has a good flavor. For years I have been doing tofu demos and l couldn’t get people to try the products. They would turn their noses up. But now when we do demos of hemp nut, people flip over it. It’s not that tofu tastes bad it’s just a mind set. In the ‘80s they asked people what their most hated food was and tofu was number one and yogurt was number two. It’s all perception.

HSE: Isn’t there still an ongoing problem with THC in hemp seed, the psychoactive ingredient of marijuana?

RR: The problem is that as the hemp seed forms, some of the resin containing THC brushes up against the seed coat and sticks to it. So when you harvest the seed you have this bit of resin sticking to the outside of the coats. You need to get that off and the way we do that is to shell it and thereby remove the resin and the THC.

HSE: What happens if you don’t remove the shells?

RR: About three years ago one hemp seed oil company produced an oil that was 1,300 ppm (parts per million) of THC. They just took the seed and turned it into oil and the process of doing so put all of the THC on the outside of the coats into the oil. It caused a whole rash of positives in drug testing. We believe it is possible to make oil with zero THC.

HSE: So you really want to get it as THC-free as possible?

RR: We have to. The drug tests are now measuring down to ppb (parts per billion). The guy that lost his gold medal was tested at 17 ppb. And that was second hand smoke from two to three weeks earlier. The drug test industry is totally skewed toward marijuana. You can smoke crack on Saturday and be tested on Monday and not test positive. THC is a sitting duck.

HSE: So what message do you want to get out?

RR: There has been a lot of misinformation put out about hemp seed. The fact is that hemp seed is more nutritious than say beans and is super high in EFA. I believe the protein in hemp seed is of a higher quality. having worked with soy for 20 years. It’s a certain kind of protein that is found only in hemp seed. I think it will be the answer to someone’s medical condition like Crohn’s disease. I can’t believe that a protein of such high quality can’t be used for some malady.