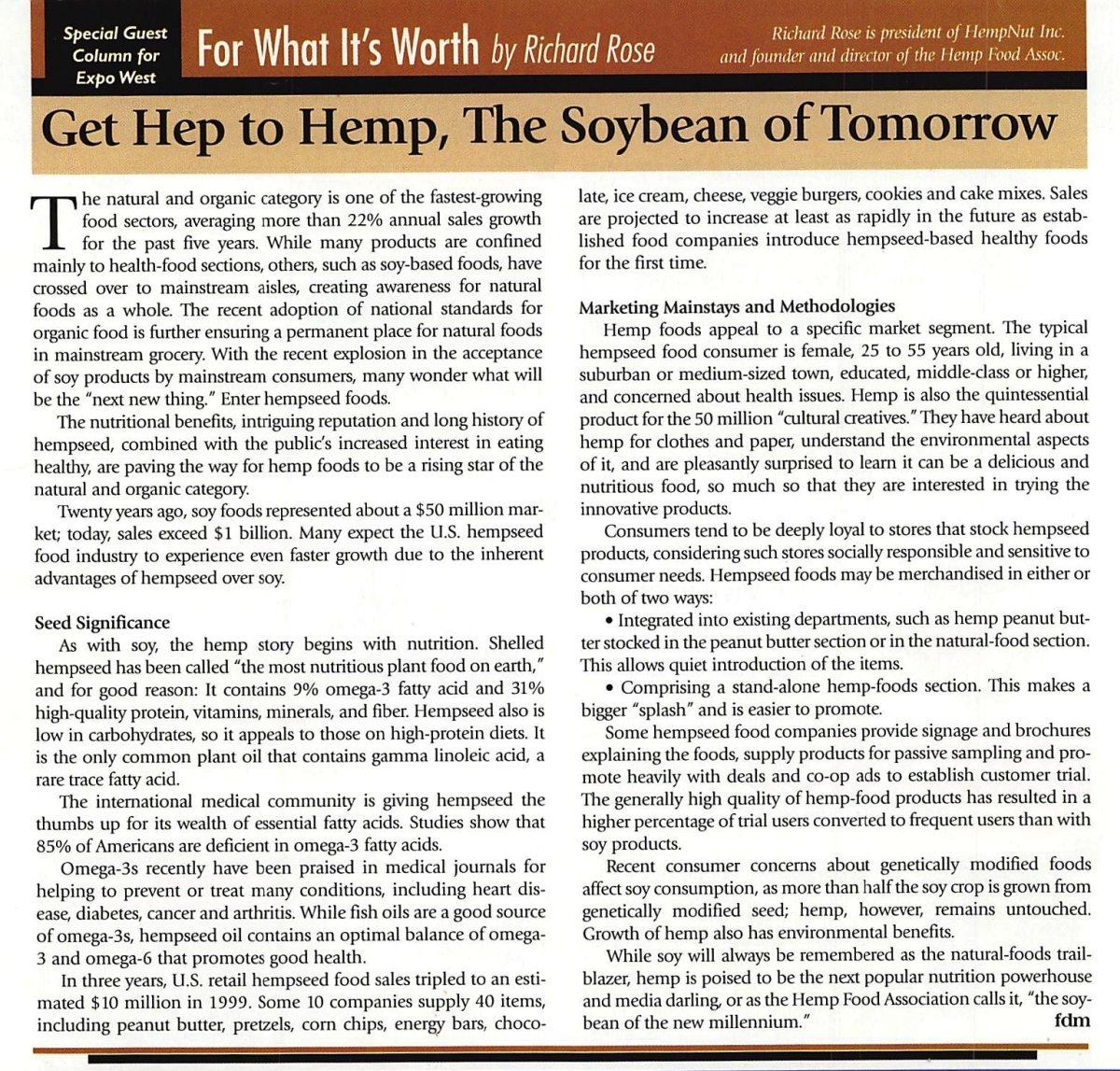 In the early and mid 1990s, supermarket chains in the U.S. and Canada didn’t know how market and merchandise the emerging vegetarian and vegan foods industry. That was typically tofu, soymilk, tempeh, and foods made from those such as my TofuRella cheese alternative and the similar foods from Galaxy Cheese, and vegan meat alternatives from Yves’ Veggie Cuisine (hotdogs and more) and Lightlife (“Fakin’ Bacon”).

They had to be refrigerated, so that limited placement within the store but vegetarian shoppers hated walking through the meat department to buy analogs. That left deli, dairy, and produce. Deli often merchandised them, in a separate case. The dairy department is more tightly controlled than drugs and the vendors controlling it are as ruthless as the Mob.

The only department left was produce, which the store had far more control over anyway, and had lower profit margin expectations. With produce we had flexibility in logistics, and could deliver direct to each store, through their warehouse, or via a distributor. Typically they dedicated a stand-alone reefer case to it, so we could merchandise it better. Like this Health Eating Center header placed above the display case:

What I learned from that experience I applied to merchandising hemp foods and shared it with the retail trade, like this. As you can see, it is brand-agnostic and an example of the early work we did to help everyone in the hemp foods industry, using the Hemp Food Association:

The natural and organic category is one of the fastest-growing food sectors, averaging more than 22% annual sales growth for the past five years. While many products are confined mainly to health-food sections, others, such as soy-based foods, have crossed over to mainstream aisles, creating awareness for natural foods as a whole. The recent adoption of national standards for organic food is further ensuring a permanent place for natural foods in mainstream grocery. With the recent explosion in the acceptance of soy products by mainstream consumers, many wonder what will be the “next new thing.” Enter hempseed foods.

The nutritional benefits, intriguing reputation and long history of hempseed, combined with the public’s increased interest in eating healthy, are paving the way for hemp foods to be a rising star of the natural and organic category.

Twenty years ago, soy foods represented about $50 million market; today, sales exceed $1 billion. Many expect the U.S. hempseed food industry to experience even faster growth due to the inherent advantages of hempseed over soy.

As with soy, the hemp stop begins with nutrition. Shelled hempseed has been called “the most nutritious plant food on earth,” and for good reason: it contains 9% omega-3 fatty acid and 31% high-quality protein, vitamins, minerals, and fiber. Hempseed also is low in carbohydrates, so it appeals to those on high-protein diets. It is the only common plant oil that contains gamma linoleic acid, a rare trace fatty acid.

The international medical community is giving hempseed the thumbs up for its wealth of essential fatty acids. Studies show that 85% of Americans are deficient in omega-3 fatty acids.

Omega-3s recently have been praised in medical journals for helping to prevent or treat many conditions, including heart disease, diabetes, cancer and arthritis. While fish oils are a good source of omega-3s, hempseed oil contains an optimal balance of omega-3 and omega-6 that promotes good health.

Hemp foods appeal to a specific market segment. The typical hempseed food consumer is female, 25 to 55 years old, living in a suburban or medium-sized town, educated, middle-class or higher, and concerned about health issues. Hemp is also the quintessential product for the 50 million “cultural creatives.” They have heard about hemp for clothes and paper, understand the environmental aspect of it, and are pleasantly surprised to hear it can be a delicious and nutritious food, so much so that they are interested in trying the innovative products.

Consumers tend to be deeply loyalty stores that stock hempseed products, considering such stores socially responsible and sensitive to consumer needs. Hempseed foods may be merchandised in either or both of two ways:

• Integrated into existing departments, such as hemp peanut butter stocked in the peanut butter section or in the natural-food section. This allows quiet introduction of the items.

• Comprising a stand-alone hemp-foods section. This makes a bigger “splash” and is easier to promote.

Some hempseed food companies provide signage and brochures explaining the foods, supply products for passive sampling and pro- mote heavily with deals and co-op ads to establish customer trial. The generally high quality of hemp-food products has resulted in a higher percentage of trial users converted to frequent users than with soy products.

While soy will always be remembered as the natural-foods trail-blazer, hemp is poised to be the next popular nutrition powerhouse and media darling, or as the Hemp Food Association calls it, “the soybean of the new millennium.”