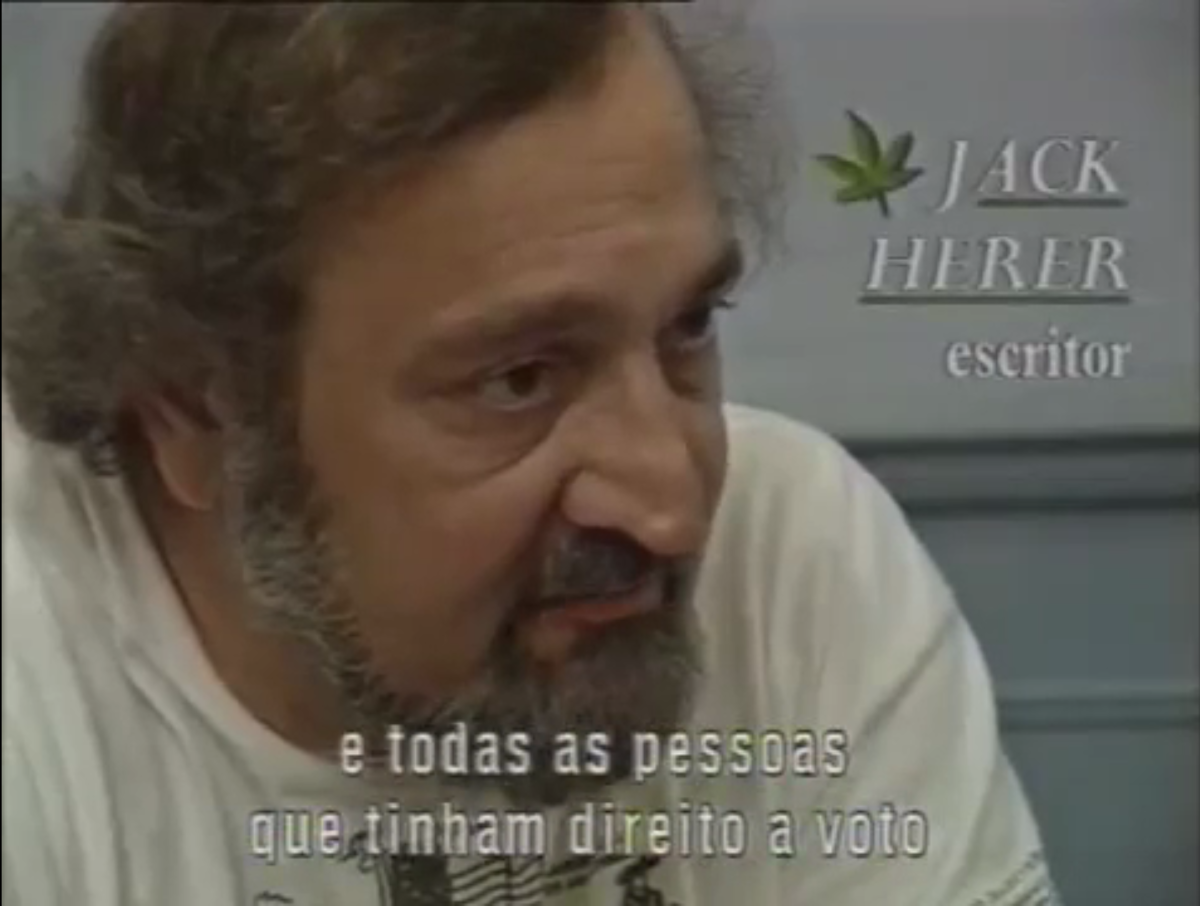 Here is a Portuguese news report filmed at the 1994 7th Annual Cannabis Cup in Amsterdam. Edited for English content and brevity.

With Jack Herer, Sean Munro, DJ Monica, Richard Rose (with hat and guitar, getting a fully-clothed massage, and discussing and sampling hemp food), Pascale and Franck Lagouge, Dion Markgraaf, Eagle Bill and his vaporizer, Julia Sparrow, Chris Conrad, Larry Duprey, Andy Waller, and Ian Low. Filmed at the Greenhouse and Pax Partyhouse, among others. Mostly in English with some French, Portuguese subtitles. 11:54

A few notes: I did as much hemp food as I could using charm and free food. The Pax café sold Hempeh Burgers with HempRella cheese, the Melkweg café also had that combo. On Thursday, Friday and Saturday at 4:20pm I gave away free slices of HempRella pizza in the Pax foyer, which at times was as crowded as Times Sq on New Years. There is no better way to meet people than give away pizza. I kept the program at subsequent Cups. A few years later Michael Kennedy (High Times/Cannabis Cup lawyer/boss/owner) was there, a rare event. The VIP dinner at the Pax had HempNut encrusted portobello mushrooms stuffed with melted HempRella, and HempNut hempseed oil in the salad.

Carrying a bunch of weird US hemp foods in shipping boxes to Schipol Customs resulted in a 6 hour wait. HempNut, HempRella, Hempeh Burger, oil, and my personal Tofurkey in a suitcase. I refused to leave without them, so they eventually took a package of each for testing and let it go. The Herbal Ecstasy guys weren’t so lucky. On the return I watched SFO Customs pop Jack Herer for literally milligrams of flower in his pockets. Notice Ian Low says max THC in UK at that time was 0.3%? Since 1994 they lowered it to 0.2%.

Eagle Bill. He pioneered the vaporizer to many of us. Using a Black and Decker paint stripping heat gun, he heated flowers just enough to vaporize the trichomes but not combust it. That same basic principle went on the become the Volcano vaporizer in 2000. Canopy recently bought Volcano producer Storz and Bickel for $220 million. Eagle Bill RIP.

Copyright 1994-2023 Richard Rose, all rights reserved. Any views expressed herein are the personal opinion of Richard Rose. This is a noncommercial public service. There are no warranties whatsoever as to the legality, suitability, ownership, purpose, or accuracy of this information. I am not a doctor or a lawyer. If you have medical questions, please seek a medical professional. If you have legal questions, please seek a legal professional. Information found here is not intended to diagnose, cure, treat, or prevent any disease. These statements and subsequent links found here have not been evaluated by the U.S. Food and Drug Administration (FDA). Hemp is not subject to international drug controls and is grown legally around the world. The information posted here is for educational purposes only and is not to be considered legal or medical advice, and is not intended to replace consultation with a qualified legal or medical professional. This website uses cookies. By continuing to use this service, you agree to their use. This is provided on an “as is,” “as available” basis without warranties of any kind, express or implied. The user assumes all responsibility and risk for the use of this website. Links are provided only as an informational resource, and it should not be implied that we own, recommend, endorse or approve of any of the content at the linked sites, nor are we responsible for their content. Unless otherwise stated, nobody pays us nuttin’ to post content, and we have no sponsors unlike NASCAR. To learn more about how we collect, keep, and process your private information in compliance with GDPR, please view our privacy policy via a link at the bottom of this page. Void where prohibited. Specifications subject to change without notice. If you don’t agree with the above please leave immediately. “HempNut,” “The Hemp Nut,” “Hempeh,” “HempRella,” “Not-Pot,” “Nobacco,” “CannaSearch,” “CannaSearch Daily,” “CannaSearch Breaking News,” “The HempNut Cookbook,” “The Richard Rose Report,” “Medicinal Hemp Association,” “Hemp Flower Products Association,” “CannLib,” “CannLib Search,” and the rest of my intellectual property are trademarks, service marks, and/or copyrights of Richard Rose, all rights reserved. All patents, service marks, trademarks, and copyrights are the property of their respective owners.