Many counties in California are banning marijuana grows up-wind from wineries, over fear of “Terpene Taint,” the smell of the aromatic compounds in the plant contaminating their wines. Yes, it’s a stretch of logic and science, but  the mono-culture grape industry owned mostly by foreign corporations rules those counties.

However, it appears that the first California vineyard to interplant with Cannabis will be able to charge more for better wine. Terroir includes the Terpenes “tainting” the wine.

However, as a new flavor compound in wine, a Terpene would be only one of hundreds of flavors, but a distinctly new one. It could be a hip new fad wine, or incorporated into snobs’ vocabulary (“...it has lingering notes of Kush with a nose of Thai landrace.”).

In the ‘90s a Champagnerie in Switzerland grew acres of high-THC terpy Cannabis as legal hemp, to be distilled into an essential oil and used in champagne. Jim Castetter in New York had a hemp flavored wine since the 90s.

As vineyards created the term Terpene Taint, when they spray sulfur call it Sulphur Stench Saturdays. Crush could be Foot Fungus Fridays, as anyone living in grape areas knows all-too-well in September.

“Hemp as a cover crop in New Zealand vineyards: A feasibility study, by Mark Krasnow and Kirsty Harkness (2019)

Our Research:
Industrial Hemp seeds (Cannabis sativa cv Kompolti) were sown in the midrow of a vineyard in Marlborough, New Zealand to assess the effects of companion planting hemp with grapevines on the vines and the vineyard soil. The hemp become established without supplemental irrigation, even in an exceptionally dry season when other cover crops failed to thrive.

The presence of hemp did not negatively affect vine nutrition, water relations, growth, or yield. Soils from the hemp treatment had higher organic matter, soil carbon, and cation exchange capacity.

Hemp plants grew roots to at least 30 cm, and were able to grow in compacted tractor wheel tracks in the row, where the root system can alleviate compaction caused by vineyard operations.

Juice/must samples from the 2019 harvest, when hemp was also grown in the vineyard, showed a higher diversity of yeast species than the control, and produced a better wine.

The results of the first season this year study show that hemp is a viable cover crop for new zealand vineyards. Presence in vineyards provides means alleviating soil compaction addition organic matter to without negatively affecting vines and potential second income stream grower. Did not have negative effect on wines actually improved quality compared with wine from grapes grown alongside hemp.” 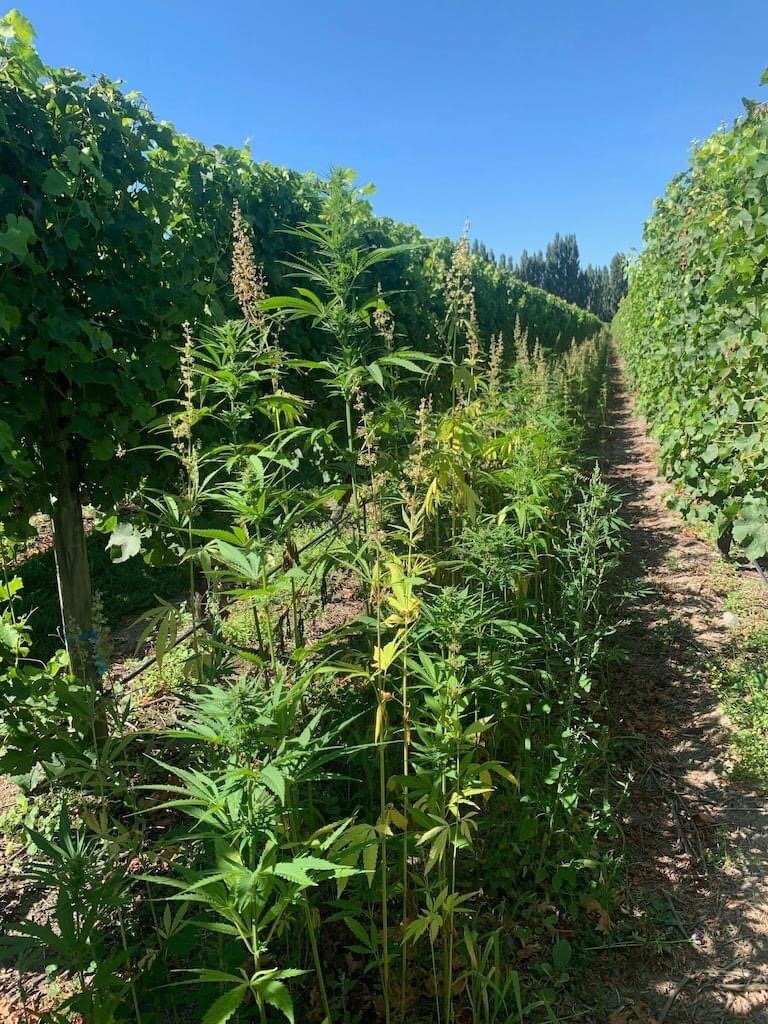