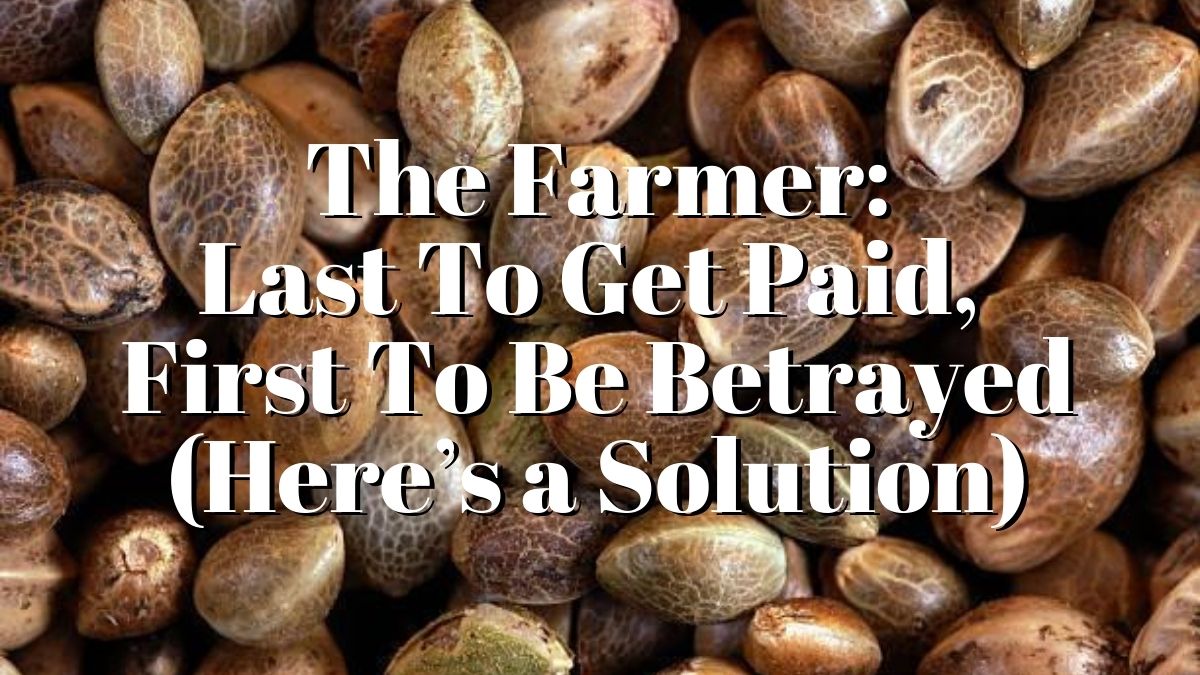 Despite a massive increase in tons of hempseed processed the last twenty years in Canada, prices today are much higher than the laws of economics dictate. Between economies of scale and competition, shouldn’t prices have come down? Odd.

Like throughout history, farmers get the short end of the stick. Some hemp farmers in Canada had to wait two years just to get 10¢ not the 70¢ per-pound of seed promised. Processor profit margins exploded the last two decades, but not farmers’. And now in the U.S. the same song but with biomass and bales of fiber. Contracts breached, hundreds of millions in bankruptcies; the farmer is always last to get paid and the first to be betrayed.

How can farmers increase sustainability and profit margins? The best way is by adding as much value as possible before letting the product go to the first customer. Seed is has the widest range of possibilities and is more sustainable; everyone eats daily. Therefore, sell shelled hempseed not whole.

Sell hempseed oil not seed, plus the 4 times more hemp protein powder you create by pressing oil. Sell branded consumer products not bulk. The more value a farmer can add, the more of the eventual selling price they can keep instead of letting the processor capture all that value. The minimum to keep one shelling line active year ‘round is about 1,000 acres. While some farms can devote that much to a summer crop, many can’t.

That’s where co-ops come in, a union of local farmers. Combine many farms within a reasonable distance to achieve 1,000 acres, the co-op processes the seed and sells it as a consumer packaged food. Want to take that to the next level? Then the co-op can brand its own line of shelled hempseed, hempseed oil, and hemp protein powder. Blue Diamond Almonds and Florida Natural are examples of this type of co-op/consumer marketer.

Want to take it turbo-charged to the next level? The ultimate is that the co-op or farm develops a line of ready-to-eat processed foods under its own brand, using only 5 to 10% hemp, such as shelled hempseed (“HempNut” was my brand, 1996-2002).

That increases your potential sales dollars by 10 to 20 times with the same amount of seed you’ve grown. One way to look at shelled hempseed is that since it takes 2.5 pounds of whole to get one pound of shelled, it is 250% hemp. Similarly, hempseed oil is 500% hemp. But most of the foods on these pages are only 5 to 10% shelled hempseed.

Below is a chart showing the value from 400 tons of hempseed sold at different stages of processing. You could sell it for $560,000, or you could sell it for $32,000,000. Another advantage of selling branded consumer foods is that it is harder to knock you off the shelf and replace you with a cheaper product, like it is when selling bulk.

Are you located in the Southwest? Sell a line of co-op branded corn chips made with 5 to 10% your shelled hempseed. That adds even more value than packages of shelled hempseed, which is still better than selling it in bulk.

Don’t settle for 10¢ when you can get much, much more. In Maryland? Make salad dressings. In Iowa and have an unused meat processing plant nearby? Make hemp burgers and hemp dogs. Have an unused cereal plant, or oil pressing plant nearby? Or a peanut butter factory? Or an aseptic milk packaging line? A chocolate, fudge or brittle factory? All those and more could be what your farm or co-op brands and sells, adding value and thus sustainability.

One thousand acres isn’t really that much; if 30% of the land within 50 miles of the processing facility is farm land, that’s only 0.062% of the farm land needed in hemp.

And you don’t have to start at 1,000 acres. That number will give you 400 tons at average yields (800 pounds/acre). But you can start lower, with less, especially if you can shell seed grown by others. Some varieties yield as much as 1,800 pounds/acre, so using those reduces your acreage needs too.

How to decide which products to produce requires a process to answer, taking into account your strengths and objectives. You want to start with the low-hanging fruit, whatever that might be for your case. How can you add value? It’s a balance between hassle/expense and return. A high return might justify a high investment, but it may not even be needed at first. There will be many iterations of your product before you hit on the right way of doing it. Start slow and easy, learn the plant first. Do field trials first, get to know her before marrying.

CBD and fiber income are lagniappe, and reduces your net cost of the seed. You’ll get about 20 times more fiber than seed, so plan on putting it to good and profitable use such as animal bedding, building materials, and the like. Done right, you’ll get a couple tons of CBD from 1,000 acres. Again, branded consumer goods would be your best path.

With a little planning and organization, you can reduce your risk growing hemp and improve your returns significantly. Forming a co-op for processing can also allow you to share farming equipment and seed purchases, and hire an agronomist. All that will be cheaper together than separately.

2 thoughts on “The Farmer: Last To Get Paid, First To Be Betrayed”