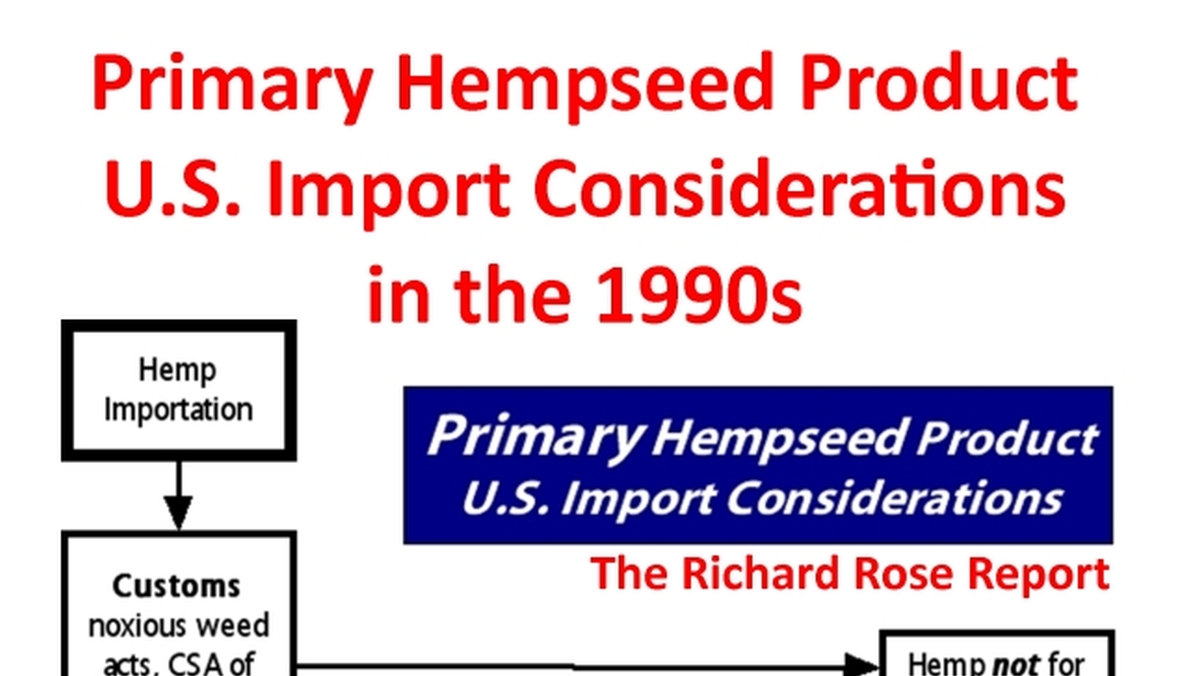 How hard was it to import whole hempseed for human consumption before we started shelling it in Germany? This hard, these were all the stakeholders in the process we had to manage.

Starting in 1994 part of my job was to manage the political, regulatory, legal, tort, public relations, and marketing risk of cannabinoids in foods for human consumption in the U.S. and Canada.

I had already been marketing foods across North America and the world for 14 years by then. My food company was the only small one named a “leading innovator” in 1986 by Food & Beverage Marketing, because of our making and marketing of tofu products in familiar American forms. Just the year before I pivoted to hempseed, the company was named one the fastest-growing businesses in the U.S, #281 on the Inc. 500, for selling “America’s most-hated food” (tofu) in the Reagan ‘80s.I literally wrote the book on hempseed as food… twice. Therefore I have a very different perspective on THC in hemp foods than most in hemp, which was dominated by fiber at the time.

Managing of that risk of cannabinoids in food led to our “zero THC” hemp food policy, first in the industry, in order to calm trade fears and answer every consumer’s first question: “will it get me high?” Was I anti THC? Oh hell no, I just understood that “rope is not dope” and the biggest hurdle hemp foods would encounter is cognitive dissonance creating the fear of THC consumption. For five years straight (but not “straight”) I was at the Cannabis Cup in Amsterdam.

I’m all for consuming THC, just not unknowingly or unintentionally. Having sat with many “bad-trippers” at concerts when volunteering for Rock Medicine in San Francisco in the ‘70s, I came to frown on “dosing” people with LSD or THC. I believed people should always have the fundamental right to decide which cannabinoids or other drugs they wish to consume, how much, and when. An undisclosed Schedule 1 controlled substance in a commercial food was antithetical to that, just on principle, let alone the catastrophic potential of failing a drug test for many people.

Apparently it was informed by my food industry experience because the fiber Hempsters at HIA gave me a ton of grief over the “zero THC” policy, although later their members adopted it. I mean really, it was so damn obvious to me that you can’t have undisclosed illegal psychoactive drugs in a commercial food and remain legitimate and credible. One shouldn’t need two degrees in marketing to see that.

But for them at that time the cognitive dissonance of “hempseed foods are zero THC” was too much to overcome. Believe me I tried. Despite having our products in thousands of stores across the U.S. and Canada for years we never had a load detained and never a customer complaint and never any regulatory or legal action against us for THC or anything else. It was proof the policy worked, DEA later said so in court and FDA never bothered us.

And it was the best possible outcome: sales were ramping up like a hockey stick and no one sued even though we had the deep pockets. We were driving the infant hemp food far, fast. No doubt soap and fiber people didn’t see it the same way an experienced food marketing pro did, but that was no reason to “kill hemp foods in order to save it.” Their epic betrayal cost me $2.5 million and years of work, and almost took Canadian hemp down with it.

The “zero THC” policy protocol required THC tests on every load imported and it had to be below 1 ppm LOQ, same as U.S. Customs. I now feel like a fool for having way 3,000 times tighter standards than FDA, which allows 3,000 ppm (0.3% max THC) in foods (Canada is 10 ppm, enforced only on imports).

As the first to import hempseed without a sterilization certificate, if the government wanted to make an example of me to shut down the emerging hemp food industry, they could have arrested me and at the extreme, sentenced me to life in prison. That’s just based on the hundreds of tons of “Schedule 1 controlled substance” I imported (hempseed), and RICO/CCE enhancement charges. Why didn’t I get a sterilization certificate just to be safe? Because once the whole seed is shelled, it is no longer viable (can’t grow) and thus entirely legal. That was one of the benefits of shelling, so I didn’t want a redundant processing step which would have just reduced quality and increased cost for no good reason. It was a calculated risk to prove the validity of the concept, importation without seizure, the first step in creating a shelled hempseed industry in America. Not everyone was as confident: the guy who moved hundreds of miles to my small town to sell knock-offs of my products to my customers and hire my CEO kept his public address far from his actual location for years, he was so afraid. You can copy a man’s products and business model but you can’t copy the man’s vision and courage to make those products and that business model.

In 1994 we introduced HempRella and Hempeh Burger, fortuitously just a month before the deadline after which new foods like hempseed would have to undergo FDA notification. Then in 2017 I submitted a lengthy comment to FDA for grandfathering as pre-DSHEA all hemp flower products; seed, oil, flowers, and the compounds contained therein including CBD (and thus logically, THC). Although we are still awaiting their decision on grandfathering (seed and oil went GRAS in 2018), it would be an elegant solution to their current conundrum with CBD. Few understand that hempseed oil can legally contain enough THC to cause a THC DUI in many states and Canada (2 ng/mL). Or that there could legally be 6 pounds of THCa in an acre of hemp. Or that to FDA hempseed and oil were considered adulterants until 2018 when it accepted them as “Generally Recognized As Safe” (GRAS). Or that because of the U.S. Customs THC analysis protocol, “zero THC” = 1 ppm, much like “alcohol-free” beer can legally have ½% alcohol and “fat-free” foods can contain ½% fat.

Ironically, importing certified-sterile whole hempseed ostensibly for birds would allow a clever importer to include one bag of high-value marijuana seed in the shipment, with very little risk. It would have been one of the easiest ways to import pot seed, the dogs wouldn’t even be used because it was already Cannabis, just low-THC seed. With only a 1:600 chance of testing the “special” bag of seed (P=0.167%), the odds would forever be in your favor. Just one bag would be worth 500 times more than what the rest of the load was. With no risk of arrest the worst the authorities would do is turn the shipment back for better sterilization if they somehow happen to find it. No, I didn’t do that, but did see the potential. With a $2 million U.S. Customs bond and working with professional customs brokers and freight forwarders, we were flirting with the margins enough as it was just importing unsterilized hempseed for human consumption and creating what would become hemp’s first billion dollar industry. We didn’t need to blow that up for mere money. Sometimes the things you could do but don’t are more important than things you do do.